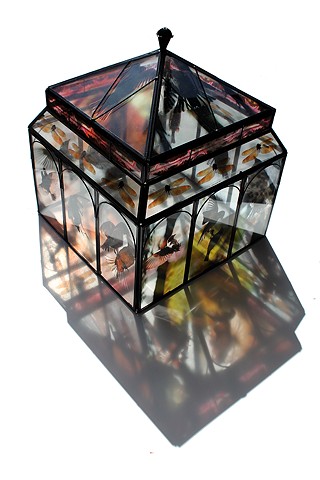 I have been a practicing and exhibiting photographer since 1976. My life began as an immigrant from Greece, Canada, and then the USA. We were a street vending family, and everyone participated in helping out when we were not in school. I became interested in psychology and sociology in college, and received my BA in Psychology, with a minor in Sociology. I worked for the City of Detroit as an Employment Counselor for Vietnam-Era Veterans. At the same time, I was coding behavior of a baboon troupe at the Detroit Zoo, with Wayne State, hoping to get into graduate school in Anthropology. My love for photography began when I photographed this troupe, and I saw the power of a stilled image. My first work was documentary, to the studio, and then back out to the world where it is today. After grad school, the ability to print large transparencies in the dark, (4ftx9ft) alone, with ladders, tape, roller skates as motors to place my large processing tubes on, became an acrobatic process, and gave me much joy. These sheets of film were then taped to windows in large public museum and gallery atriums. After my Fulbright Scholar grant in '86, I created a maze of color transparencies that were photographs of street advertisements in Greece, uniting the viewer with the image, adding their live body and another dimension of stilled/layered images from an outdoor space. As I got older, I started making small boxes to hold my street photographs of Greek people, specifically, religious fanatics, molded into clear acrylic resin, with color transparency, and a light inside. "Orthodox Opiate", are 6 small box shrines of people carrying icons, stopped in motion on the street. These boxes were at my mid-career retrospective at the Cultural Center in 2005. With some difficult times, I found relief by photographing the outdoors, specifically, clouds. Hoping to see figures/animals, any shapes that could be detected, analyzed. These clouds were exhibited and hung where one front light projected color abstractions on the wall, with different shapes seen and described for each viewer. "Homage to Joan of Arc", is a model staircase whereby the public walks up and down plexiglass stairs with transparent color images of fire underneath their feet. A Dante's inferno with no exit, nor change in color intensity going up or down. Each person would see themselves on glass, a constant engagement with the viewer that has been primary in my work. "The Timing of Birds" is new work that goes back outside, photographing birds while eating/engaging with each other, right out my window. A visual analysis of small life and the fragility of all life on our planet. With these stills, I wanted to hold them in a box, a memory of someplace safe, reminding me of what is seen right out my window. I have made 20 Birdboxes, shown along with 164 8x10" prints at Bert Green Fine Art, Michigan Ave. Chicago. Sept-Oct 2020. The power of stills, placed near each other, continues to give me joy, with multiple meanings for each person because of all its endless transparent layers.

Thank you for taking the time to view my work! I can be reached at: elialios@gmail.com Some work is for sale. Price upon request.